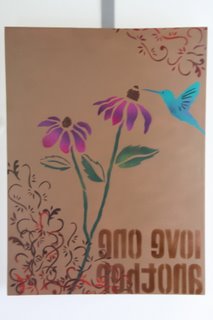 Another recent work...i can't decide if i like it or if it's just cheese-y. Should i paint over it?
Posted by Lora at 11:57 AM 1 comment: 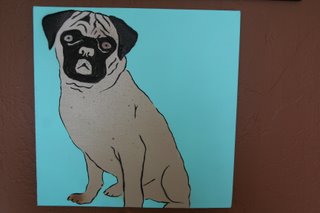 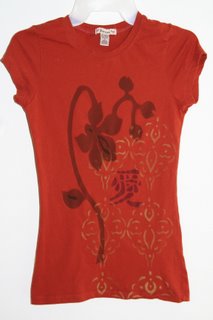 this face
is mine
not a traded-up
trophy face
and if the light is just right
dim
off
it reminds me
of
what we used to
be:
young


thursday night we did something fun--a friend of craig's told him about an open mic night in the haight at which he planned to perform so we went in for it.....dive-y little coffee shop, many characters showed up to do their gig...one guy who kinda "mc"-ed the evening was called mr. natural...300+ pounds, ZZ Top style beard, receding hairline but long and pulled into a thin greasy pony, large 80's-esque glasses with tape holding one side together....too much "natural"---take a shower, dude. contrasted by the fresh-faced lanky maybe-20-year-old guy who introduced himself as from north carolina, and this was his first time to perform in california...he and his buddy just drove cross country and were shell-shocked at the cost of living here. i suggested they get 18 more roommates and then they'd be able to make it just fine. they must not have the INTERNET in north carolina where you can research housing prices all over the world..................oh, and the trio, two of whom were father and son, the son being maybe 11 and amazing on the djembe drum. so sweet.....omg, how could i almost forget the guy who opened by telling us he's a recovering addict in a program ( i had to instigate a round of applause), and then introduced his second song by explaining he wasn't quite sure where it had come from as he doesn't have a girlfriend, and didn't cheat on the girlfriend he doesn't have, but there it is. he had that nervous-pent-up energy feel to him, and his leg just jumped and danced and made visible the passion in his song soaked soul.
the view into humanity was beautiful tender vulnerable raw. i sat there marveling in and longing for that passion for music in my soul...perhaps it is a mercy i don't have it...i have enough to deal with in attempting to live out and in the passions i do have.............but if i can't have the music, can i at least smoke?
Posted by Lora at 10:14 AM 2 comments: 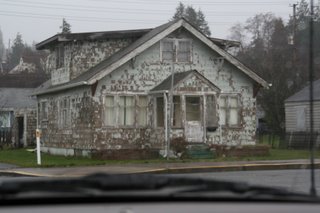 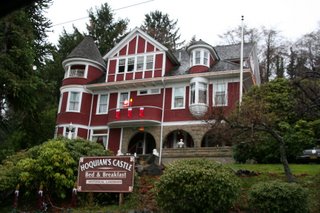 I can't figure out how to title this post, so for now it won't have one. Or perhaps I should borrow the line from Kurt Cobain "come as you are", which the city council of Aberdeen (his home town, and next-door-town to my hometown), was snookered into putting on the "welcome to....." sign as you arrive. The story goes the suggestion to honor Kurt by using one of his lyrics was voted down, so someone suggested come as you are, and everyone thought that was a fine idea, and much less controversial than words from some dead druggie. But that phrase doesn't really capture what I'm going to try and say..."STAY as you are" would be more fitting. At least that is one of the feelings I get when there, that things don't change, and things or people who do are viewed rather suspiciously. I realize I am not objective, and all these impressions may be mine alone and unconnected to real life there. But as soon as we drive into town, I'm ready to leave. I feel suffocated and anxious. Maybe it's just the past that I want to get away from...actually, i think that is part of it, but not all as I get similar claustrophobic feelings in other small towns. In thinking about it I believe it has to do with not having options, feeling trapped.

As you may have noticed the two houses pictured are distinctly different, yet both represent aspects of my childhood. I'm also using their differentness as an illustration of my conflicting feelings regarding the place I spent those years of growing up. All this is on my mind because we spent two days visiting family there right before christmas. I have a sibling who has built a life there, and there are aspects I really admire about that choice. I just couldn't do it, and needed out of there...but that doesn't mean it can't be the right choice for others.

So, the houses...the ramshackle peeling paint one illustrates in some way how I feel when there..."going back", almost like traveling back in time...or like a time warp where parallel paths have moved along, but that one stood still yet decayed all at once...and so many of my memories of growing up there are of dampness and rain, grey skies, that distinctive smell of wet cement, an empty feeling inside---not unique to being there, yet always magnified when there............................And then the red house...well, that's where I lived from age 11 to 18. It felt like longer than seven years. I guess it's in that way that time is longer when you are a child. They are truly formative years, the childhood ones, and I'm still trying to make sense of them and sort them out, and see the good and the not so much. The house, "The Castle" as it was known in town (a big fish in a small pond), so tidy outside and in (my sister and I did most of the housecleaning), tidy like a museum as that's what it was (has since been made into a bed & breakfast: www.hoquiamscastle.com )...yet we lived there, and didn't know quite how to do it with strangers walking through and peering into our lives and rooms and closets. "Don't you just love living here??" so many of them asked...well, actually, NO...and if you thought about it for even a nanosecond you'd realize no teenager, nor really anyone, would want to live in a place with no sign of themselves, no privacy, being looked at all the time, with the added requirement of escorting people (for the entrace fee, of course) through the rooms---with a smile and good attitude, goddamnit. Home was a castle, but it was no haven.

And Mom (Dad), if you read this, please know I love you, I truly know you were doing your best, and it wasn't all bad. It was hard, I wouldn't have picked it, I would rather do without my right arm than ever live in that town again, but oh well, it gives me an interesting story as not too many people can say they grew up in a castle.
Posted by Lora at 8:09 PM 1 comment:


Friday night, or the wee hours of Saturday morning, I was ready to call this number and arrange a house call by Dr. Kevorkian, or anyone else willing to put me out of my misery. It is amazing how just a few hours of puking, chills, and intestinal distress (Meeg calls it "peeing out your butt"; i call it no fun at all, especially when you're throwing up at the same time) can bring me to a place of no principles whatsoever, ready to endorse assisted suicide---as long as it's mine, that is.

I don't know how it started, but I do know when: around midnight Friday. I thought I was so tired I was getting naseous...nope, I was SO getting the flu, and preparing to puke and shiver and, well, you know. Between 5 and 6 a.m. my body decided it was sufficiently empty and could spend the next 16-ish hours with every bone, joint, and my head especially, aching. My room was far too bright for such an aching head (as was the computer screen and the TV). If there was a black hole nearby I would have dove into it. As it was I hibernated on the living room couch, drapes drawn, doors closed, doggies present, with an occasional shuffle out to the kitchen for a glass of Sprite.

Okay, what's really weird is that Craig was just as sick as me, at the exact same time, but not the same bug. His was respiratory rather than intestinal, but he was equally knocked out at the same time. We felt like we lost an entire 24 hours. Each of us was able to get a decent night's sleep on Saturday, and felt a lot better Sunday morning. For me, however, I didn't really feel back to normal until late this afternoon, and perhaps not entirely 100% as coffee after dinner was still unappealing...I opted for tea.

Tea is so loyal...I mostly ignore her, think of her as the slightly dim stepchild to my brilliant, high achieving first-born-son coffee(shall we call him "Peet"?), yet when I need her most, reach for her in my time of weakness and need, she never overpowers nor gloats...just shows up---hot, sweet, mild, comforting---my djarling.
Posted by Lora at 10:16 PM 3 comments: